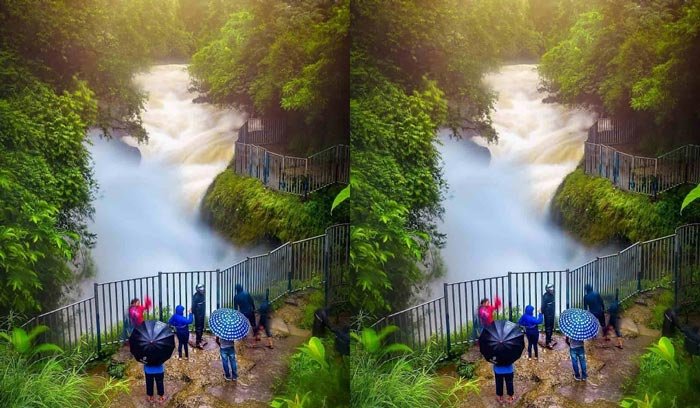 Davis Fall in Pokhara is an exceptional waterfall that makes 500 feet in length underground tunnel as it arrives at its base. This passage has brought the fall its name, i.e Patale Chango in the Nepalese language, which signifies “underground waterfall.”

Supplied by Phewa Lake Dam, the waterfall is surrounded by plentiful vegetation. A milestone of Pokhara, Devi’s waterfall is an absolute must-visit when in Nepal. Observe the richness of nature as you see this epic fall battling with rocks to free itself.

The Speciality Of Davis Falls

The water frames a tunnel later succeeding at the base. This tunnel is approximately 500 feet (150 m) long and runs 100 feet (30 m) underground level. After leaving the tunnel, the water goes through a cave called Gupteshwor Mahadev, or “cavern underneath the ground”.The Phewa Lake Dam is the water source. The cave additionally works as a travel industry site since it has hidden views and people even fail to remember the path inside the cave.

The sculptor’s hand wouldn’t make it more fascinating. One can only imagine the power of water being able to shape this landscape carving so amazing structures, holes, tunnels, narrow passages, and bridges.

Pokhara’s Davis Falls is one example of how wonderful creations of nature can turn into a position of sad memories for a few. A Swiss couple was washed away by a flood while showering beside to the fall in 1961AD. Mrs. Davis lost her life and the fall was named Davis falls in her pitiful memory.

During the monsoon when the water level is extreme in Phewa lake thundering sound of the falls is audible even from outside and droplets of water flow around the air animating the visitors. In the adventure, you are blessed and the climate has unclouded the interference of light with the water bubbles from the falls reflecting an area of excellent shadings getting later the rainbow.

Other than falls, and Experience the Nepalese culture, there is a little park that shows customary Round Nepali House alongside a couple in the traditional outfit.

Try your Luck at the Luck Pond, an artificial mountain, and a Luck pond. People test their luck by dipping coins in the lake. The entrance of the falls is capped by vendors selling local handicrafts, jewelry, idols, and more. The place stays crowded all year by the observers.

Visit the Gupteshwor Mahadev, As the name suggests, “a cave beneath the ground”, acts as the source via which the fall’s water passes after exiting the tunnel. The ancient cave beside the fall is known for its unique designs.

The falls are located right before the Tashi Ling Tibetan Camp on the road that leads to Butwal. You can either hire a taxi or take a bus from Phewa Lakeside to arrive at the falls. To make your trip a little more venturesome and to experience the town’s beauty at its best, you can also rent a bike or a scooty to reach the attraction.

Q.2)Is there a direct bus between Nepal and Davis Falls?

Yes, there is a direct bus departing from Kathmandu and arriving at Pokhara. Services depart once daily and operate every day. The journey takes approximately 7h.For more details visit.

Q.3)What is the opening time of Davis Falls?

Q.4)How much is the allotted sightseeing limit?

Q.5)What are the other places to visit near Davis Falls?

Q.6)How much are the passage fees?

The estimated fare is 100 NPR.